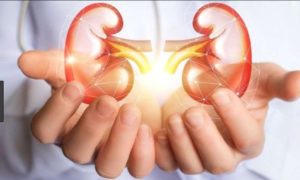 That is a larger percentage than diabetic neuropathy!

From what I have read, there are at least two main thoughts on why this may occur. The first is that with the suboptimal filtering of the blood there are higher concentrations of “toxic” elements in the blood and these physically damage the nerves themselves and/or the small blood vessels that supply the nerves.
The other is that the improper maintenance of electrolytes such as potassium (K+) cause a disruption of normal function in the nerve cell membrane. Keeping it in a constant depolarized, or fired, state. So those affected nerves are always firing abnormally. They are just existing in a fired state. Not good at all. Here is a quotation below:
“Nerves of uremic patients have been shown to exist in a chronically depolarized state prior to dialysis, with subsequent improvement and normalization of resting membrane potential after dialysis. The degree of depolarization correlates with serum K+, suggesting that chronic hyperkalemic depolarization plays an important role in the development of nerve dysfunction in ESKD. These recent findings suggest that maintenance of serum K+ within normal limits between periods of dialysis, rather than simple avoidance of hyperkalemia, is likely to reduce the incidence and severity of uremic neuropathy. Muscle Nerve, 2006”
If you think about that it makes a lot of sense. One of the main things for nerve cell membrane activity is called a sodium potassium pump. Having issues with too high of potassium levels outside of the nerve might create a pressure gradient that “holds” that cell in a constant state of firing.

Interesting right? They still had neuropathy, but it was not quite as severe

Too much persistent potassium pressure?

If you are someone with kidney dysfunction do not take this as a recommendation to change your diet. As always, follow your physician’s recommendations as far as diet and lifestyle.

What about kidney transplant?

Once again, they still had neuropathy, but it was not quite as severe

As I was browsing journals I noticed there were quite a few dedicated to restless leg symptoms in uremic (kidney problem) patients. That was interesting as we do get asked about restless leg symptoms along with neuropathy from patients. There are more study articles for uremic patients (patients with kidney dysfunction) and restless leg syndrome than I remember reading with other peripheral neuropathies. I also can recall quite a few (although a bit less than our overall success rate with pain/numbness/balance) stating that as their “normal” neuropathy symptoms improved their RLS symptoms improved as well.

So, it may not be that uncommon to have restless leg symptoms along with peripheral neuropathy

Once thought to be more of a separate condition and part of a central nervous system type dysfunction might be more common with peripheral neuropathy than once thought.

Timothy Kelm DC is one of the clinicians at Realief Medical PA. Since 2007 (or as he would put it, before you ever saw an advertisement for neuropathy therapy) he has worked with many patients with peripheral neuropathy. He also trains new clinicians for Biolyst LLC, a medical company working for solutions to peripheral nerve damage. He has presented at the University of Minnesota Gynecological Oncology Research Symposium, has participated in Tier One research with neuropathy therapy for laser treatment for neuropathy symptoms. He also lectures in the US to patients on peripheral neuropathy and neuropathy relief. He can be reached by contacting his patient coordinator Amanda via email, amanda.zerwas@realiefcenters.com or by phone 952-446-7424.

Why is it so hard to get help with peripheral neuropathy?

The autonomic consequences of peripheral neuropathy

(Quotations in this post are from the excellent article at the bottom of this page) Her[...]

Is it peripheral neuropathy or something else? Many times it is both

Peripheral neuropathy, regardless of cause, is a nerve issue.  Some damage process, whether that is [...]

Most clinicians who work with peripheral neuropathy begin to adopt the mindset that if anything (leg[...]

Neuropathy messes with your strength and balance

Neuropathy messes with your strength and balance I could have also titled this, “I exercis[...]